Refer to this page if you're looking for an answer to your questions! You may also find your answers on the How To page.

What exactly is Elyxium and Aphex Empire?

Elyxium and/or Aphex Empire refers to an ARPG based around the species Aphex and their respective sister species in the world referred to as Elyxium.
ARPG refers to an Art Role-playing Game, where you participate by drawing the species of this world and in effect, upgrading your characters and expanding stories. We believe in inclusion in the community, so you can still play non-dependant on skill. We request that users should be 16 of age or gain the approval of guardians to participate as the world may contain mature content.

How do I get my redesign/MYO approved?

​We are now using the website masterlist to carry out MYO approval and redesigns.
You can run a design by a mod if you want it to be looked over before submitting.
​If you want a more detailed explanation on HOW to do this on the website, read here.

An item was added that is the same as my Premium trait?

Due to the constant growth of Aphex Collective, we no longer replace premium traits that were added as items later in the game. Such as adding multiple arms as a trait item if your character already has them from a premium trait. We do this as usually, the trait will be as uncommon as a premium and items are added so often that we can no longer ensure that premiums used will not eventually be found in items. The character can always be redesigned if you obtain the corresponding item and swapped out to gain your premium token back.

What can I change on a redesign?

We allow you to slightly change colours or markings on your redesigns. Trait wise, you can only swap one or two.
Your redesign should closely resemble its first form. You can drop traits if need be, but you wont be able to get them back.
If you have upgrade items or specie modifiers, you can add this during the process.

Can I submit a NSFW reference?

We do not allow graphic nudity on the website currently as we do not have the support for filters, so any NSFW references should be covered or have an alt SFW version. You can then send in a link to add to the note section of the image that leads to the NSFW only if the NSFW version is on a website that can filter the image as adult content (Toyhouse, DeviantArt etc).

What can I sell?

You can sell any items or characters in the group. Only FTO locked characters can not be transferred until unlocked!

What are the rules on trading?

You can find all up-to-date info about ownership rules here.

What is restricted when making designs?

We ask for you to keep your design civil to keep the spirit of the game. This includes no profanity, negative symbolism or discrimination.
We also do not allow carbon copies of other designs you do not own and copywritten characters.

Can I co-own my Character?

We do allow co-ownership, however only one owner can be the main owner. They will have the power to trade, resell etc.
Co-ownership should be discussed between the two players.

If you are having any issues with your account, we can fix these for you. Either submit a claim or contact a mod of Discord or DA.

What happens to my characters if I am banned

Your characters will remain under your name until they are traded or voided. You will not be able to accept any new characters.

Is there a cooldown on trading?

We do not currently enforce any cooldown on characters.

What does it mean if a trait on my character says Locked?

Sometimes Mods will lock a trait on a character (Usually adopt) so they can sell it for cheaper without worrying about that character being used to earn trait tokens off it. If a trait Is locked it means you can not redesign it and pull the trait off the character, but only change the type of trait in its rarity if you need.

How do I get an Alt form added to my Character?

If you have an affliction that grants an alternative form, you can apply with a claim with the image attached and the character to get the form approved. Some items like werewolf scratch etc allow this visual form to be added which can earn AC when submitted. Some forms may be rejected or reduced to avoid the use of exploits. These are usually highly simplified designs, small designs or forms too close to other closed species (without approval).

If your affliction has multiple forms like "can turn into animals" 1-3 forms can be submitted as this is a critical affliction. These need to be existing or extinct animals (Nothing made-up or mythical).
If your affliction relies on Elyxium closed species forms (Etc cloning others, resembling other approved characters or parts of them) then you do not need to submit an alt form, these are counted as pre-approved since the designs are already resembling existing characters or forms.

Can I have a "past life" Xeode form?

We now allow Xeodes to have past or alt forms. These are restricted to one (1) Aphex or Dephx and must follow the rules below to be accepted.

Can I have a human or animal Toto form?

Due to the vast options for animals. animal forms are not yet currently allowed for AC. Human forms (1) for Totos are allowed and can be submitted anytime. Please follow the below outline to ensure they meet the requirements.

What should I include when submitting my artwork?

We now have a AC calculator you can easily use to figure your earnings. We request that you include your math/tiers when submitting prompts so we can proofread.

Can I submit NSFW artworks/written works?

You are allowed to submit these types only if they do not depict any illegal activities. You must be 18+ to submit any artworks with adult content, and clearly state a warning of the content for mods so they know what type of artwork they are processing. It is also advised to not share any NSFW work subjects in the Discord, only in allocated communities. Gore is okay to be submitted but should still have trigger warnings. You should be 16+ to submit intense gore imagery.

What if my artwork doesn't fall under a tier?

Sometimes artworks won't fall under one of our common tiers, if this is the case, please message a mod or comment so on your prompt submission and we will work out a reasonable amount for you.

How do i properly classify the frame of my artwork?

You can use this little sheet to help get a grasp! 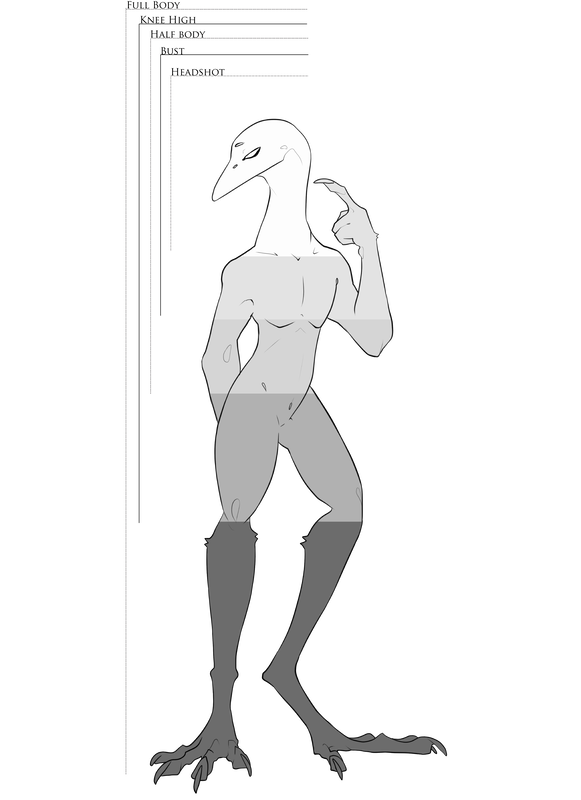 What are the limits on using our characters lore-wise?

We do not restrict how you use your characters at all! You can draw them in any universe and with any other characters. You can use them however you'd like, but when submitting official artworks for prompts and events, we ask that you follow the lore of the species.  This means only using the afflictions you have unlocked on your character and their official design. You are free to interpret the world however you'd like.

Can you use the same affliction on my character multiple times?

Every affliction can be applied once per character including ones with stat additions unless they specify otherwise.

What may cause a user to be banned?

There are a number of issues that may cause a member to be banned. Small offences may be carried through with a three-strike system, while larger offences may cause an immediate ban.
Offences that can result in banning include -

How do I change my username?

To change your username, you need to inform a mod and they can update it for you! It is mostly advised to make a ticket on the Discord or to directly message a mod.

Does boosting the server earn any rewards?

We are now granting rewards for those who boost our sever. These rewards are given at the start of every month alongside Patreon rewards.
This Bundle includes: Trait Token Box and 5 Shards!

Still have questions? Feel free to contact us on DA or Discord!